“When we read or hear Hull we naturally think E.B. Eddy’s Matches.”

The Workers’ History Museum is proud to announce the opening of a new exhibit at 25One Community: E.B. Eddy Co. – Paper, Matches and More. For over 150 years, through technological changes, disastrous fires, depressions, and company acquisitions, Eddy Co. remained one of the largest employers in the Ottawa region. The exhibit tells the story through image, text, and artefacts, focusing on the experience of the workplace and the workforce.

The exhibit is another step in our becoming a museum with four walls. Following our permanent exhibit, Britannia: The People’s Playground, at the Ron Kolbus Lakeside Centre and our installation of Performing History, Performing Heritage: Photographs of the E.B. Eddy Complex at Carleton University’s Department of History, our new exhibit occupies an entire wall of 25One Community at 251 Bank Street.

Featuring a panoramic view of the site from the National Archives collection, there are six interpretative panels on the main wall covering topics such as Working Conditions, the 1900 Fire, Unionization and Work/Life Balance. Original artefacts on display include a matchbox, resin basin, silver safety match case, and a 1944 Handbook. There is also a lively info graphic from the handbook displaying the process of papermaking that captures the imagination. 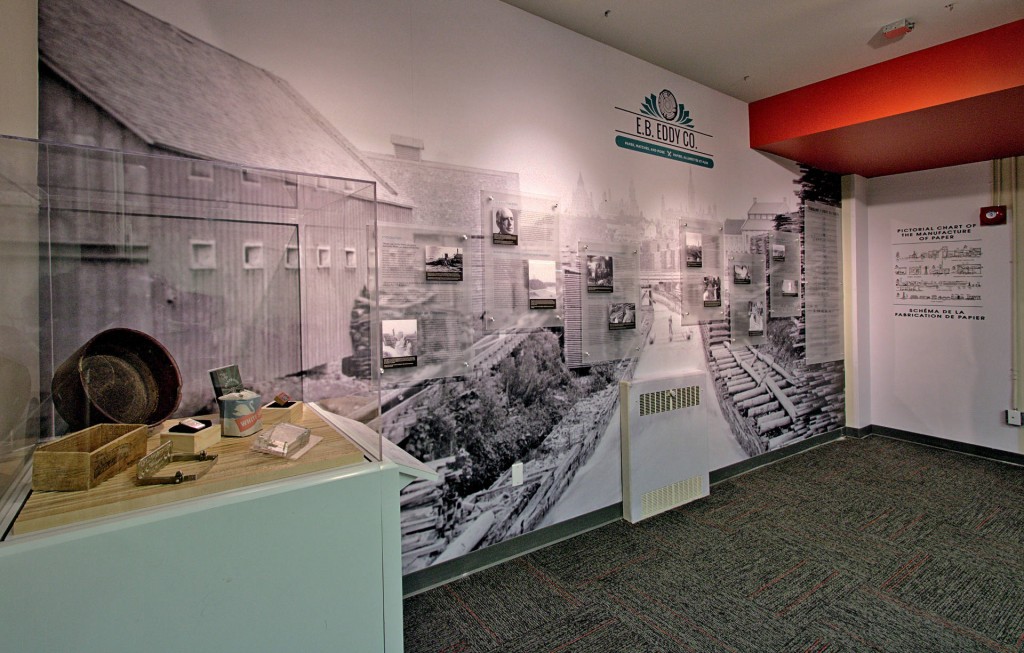 This exhibit was made possible through the financial support of the Communications, Energy and Paperworkers Union of Canada (CEP) and thanks to the efforts of former CEP president Dave Coles. We would like to thank Ken Clavette for his inspiration, Paul Harrison for his photography, and David McGee who gave us valuable assistance with the Eddy archives held at the Canada Science and Technology Museum. Keith Newman and Gilles Robinson helped us with translating the text of the Eddy Handbook. Jennifer Anderson and Vincent Lafond (Canadian Museum of History), Richard Briginshaw and Michael Wheatley (Algonquin College), and David McGee and Marcia Mordfield (Canada Science and Technology Museum) provided assistance with photographs. Many thanks to Rosario Castro of 25One for all her help in making this project happen, to John Anderson chair of the 25One Board and the members of 25One Community for their support, and to the building owner, Dino Bertolissi, for granting us permission to install the exhibit and the window graphic at street level.

We would also like to thank the Algonquin people on whose unceded territory the E.B. Eddy site stood. However the dispute over the Chaudière Falls and its environs is resolved, we hope that everyone will appreciate the story we tell here of the lives of the thousands of women and men who worked at E.B. Eddy. Our exhibit is dedicated to them, to those that are still with us and of course to the memory of those who are not.