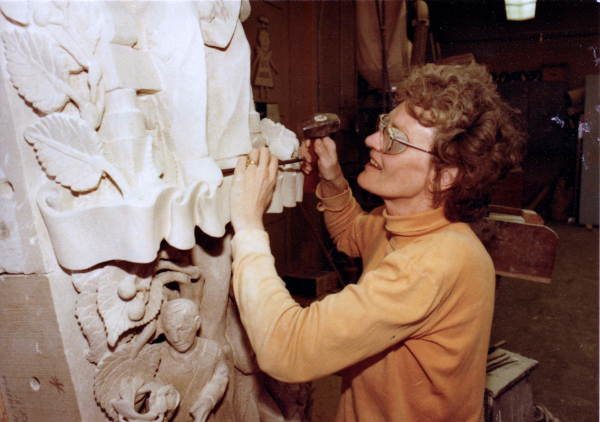 Eleanor Milne was the first woman appointed to the position of Dominion Sculptor of Canada. Eleanor came from an artistic family who would influence her future career. She began post secondary studies at the Montreal Museum School of the Fine Arts while simultaneously pursuing anatomy and medical studies at McGill University. She went on to study at the Central College of Arts and Crafts in London, England, where she was introduced to gothic architecture, stone carving, and sculpture — skills that would become important later in her life. She returned to Montreal and studied wood carving at l’École des beaux-arts before completing her post-graduate studies at Syracuse University.

In 1961, when the Department of Public Works decided to begin a project to carve scenes from Canadian history into the Parliament buildings, Eleanor was the only female candidate amongst 20 males. She was chosen due to her vast background and skill, and became the first female Dominion Sculptor of Canada.

Eleanor held the post of Dominion Sculptor from 1962 until 1993, when she retired. During that time, she made not only stone carved murals, but also stained glass ceilings and woodworked furniture. She also led a team of men who showed her nothing but respect. Eleanor continued to create art her whole life. In 1988, she was inducted to the Order of Canada.