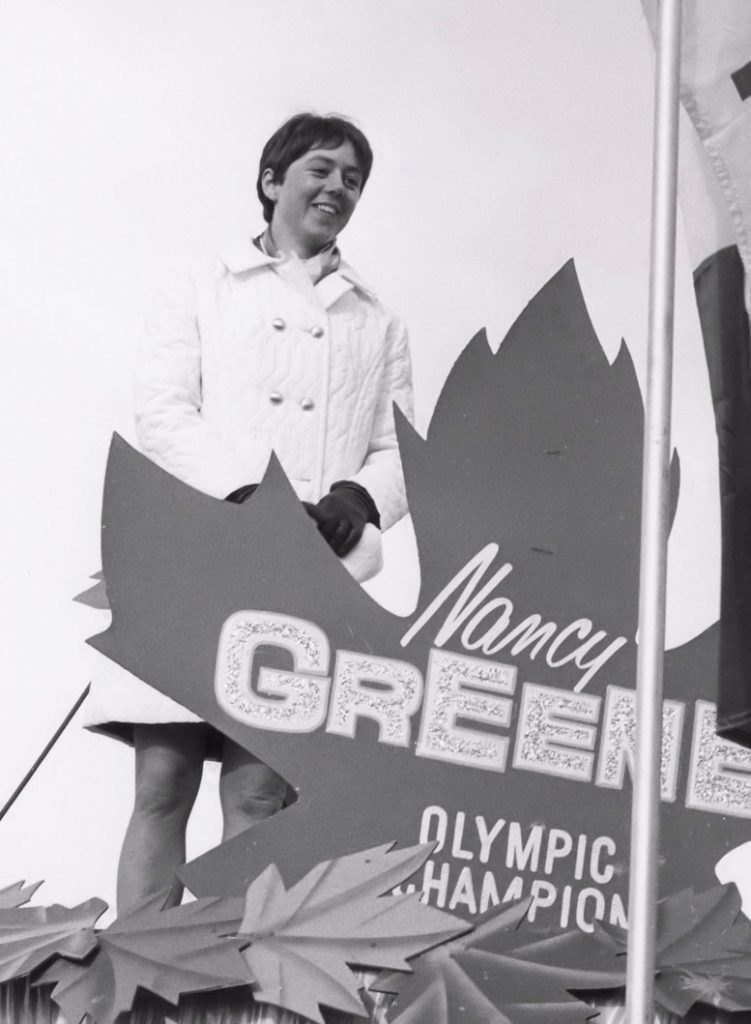 Nancy Greene won Canada’s first Olympic Gold medal in the Giant Slalom event. Nancy was born into a ski-loving family. When she was an infant they moved to British Columbia. There, at the age of three, Nancy began a ski-loving lifestyle that continues to this day.

The young athlete was given the nickname “The Tiger” due to her go-getter attitude. She began skiing competitively at the age of 13. By 1959, she was a member of the Canadian National Ski Team. At age 17, she competed in her first Olympics at the 1960 Winter Olympics in Squaw Valley, California. She returned in the 1964 Games in Innsbruck, Austria, and the 1968 Games in Grenoble, France where she won three medals — gold in Giant Slalom and Slalom, and silver in Combined.

Nancy retired from competitive skiing after the 1968 Olympics, but kept the sport as part of her life. She was active in ski tourism in British Columbia, including sitting as Honorary Chairman for the Nancy Greene Ski League, an organization set up by her husband. The couple also helped develop the Whistler-Blackcomb Resort and Sun Peaks Resort; she remains the Director of Skiing for the latter.

She has always promoted living an active lifestyle and focusing children’s sport on participation, not competition. Her consistent advocacy for these causes led her to becoming a member of the Federal Task Force on Sports for Canadians. In 2004, she also became the Chancellor of Thompson Rivers University.

In January 2009, Nancy was appointed to the Senate of Canada, representing the region of Thompson/Okanagan/Kootenay. As Senator, she was involved with the committees for Aboriginal Peoples, Fisheries and Oceans, and Social Affairs, Science and Technology. One of her prized accomplishments was establishing the first Saturday in June as National Health and Fitness Day. She retired from the Senate on May 11, 2018.

Canadians still recognize Nancy as one of the country’s best athletes. She was titled Canadian Athlete of the Year twice, in 1967 and 1968, and in 1999 she was titled Canada’s Female Athlete of the Century. She was inducted as an Officer of the Order of Canada as well as the Order of Dogwood in 1968 and the Order of British Columbia in 2004. She holds three honorary degrees from University College of the Cariboo, Royal Roads University, and Simon Fraser University. In 1972, the Nancy Greene Provincial Park near Rossland, British Columbia was named in her honour. She currently enjoys living at Sun Peaks Resort and still continues to ski.