In the summer of 1986, the Alberta oil boom had gone bust (it has before and will again). The bad economy was pitting workers against police as employers used the times to push for concessions and cuts. Workers in turn fought for their lives.

Picket lines were up at Suncor in Fort McMurray, at Zeidler Forest Products operations in Edmonton and Slave Lake, and at Red Deer’s Fletcher’s Fine Foods. But it was Edmonton’s 6-1/2 month walkout by 1,080 workers at Gainers (a meatpacking company) over a fight on wage rollbacks and pension protection that galvanized the Canadian public.

The union members walked out on June 1st. Supporters blocked the 66th Street gates, rocks and paint bombs were hurled, and bus windows smashed as convoys of scab workers were brought in by owner Peter Pocklington to keep Gainers running. At one point about one-third of the entire Edmonton police force (375 officers) were committed to the Gainers’ plant. 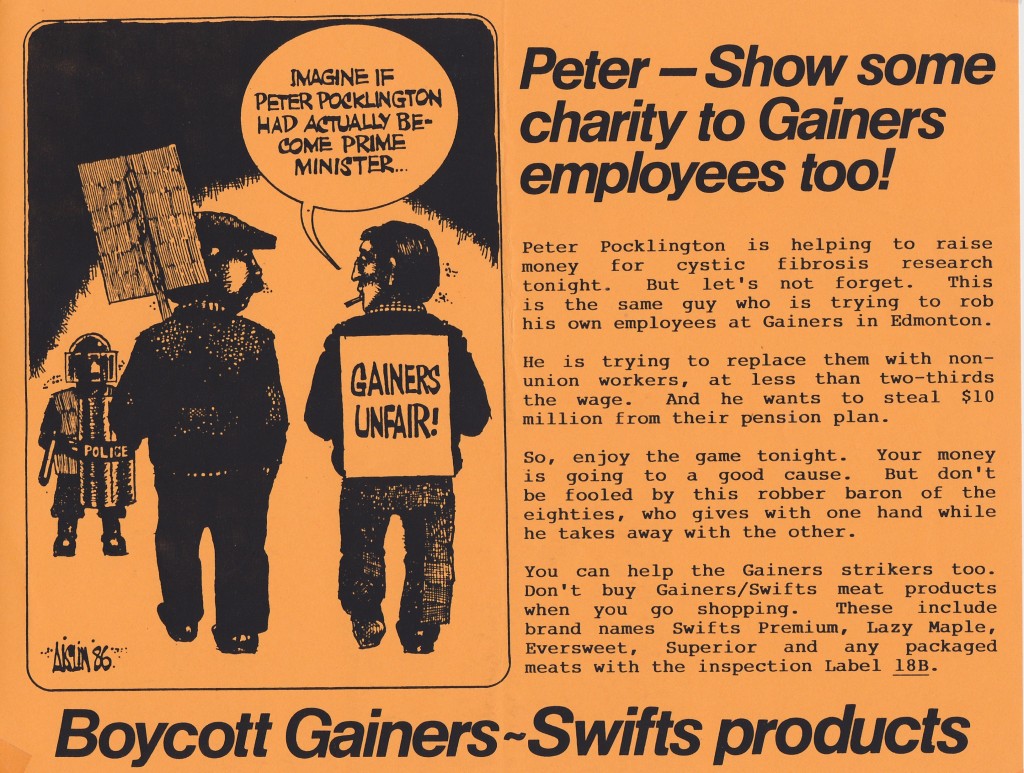 The Alberta and Canadian labour movement rallied around the workers who made $12-an-hour in a dirty, dangerous industry against the wealthy, outspoken businessman who also owned the Edmonton Oilers hockey team.

Gainers quickly won injunctions restricting the number and location of protesters, but union supporters followed delivery trucks so they could pressure retailers to buy from competing firms. Then the boycott spread across the country. In one of many efforts, Ottawa supporters picked a hockey game in between the Oilers and the Montreal Canadians on Sept 19th. They were led by a human-size pig and a hotdog. The picket was one of many local actions to support the boycott.

“It was the most effective boycott I have ever witnessed. It spread right across the country,” said retired Alberta Federation of Labour President Dave Werlin.

The strike dragged on until a contract was reached in December, after meetings mediated by then-premier Don Getty. After the deal the Alberta government announced $61 million in loans and loan guarantees for Gainers to help build a packing plant in Picture Butte, a plant that was never constructed.

Mr. Pocklington, who was also known as the man that traded Wayne Gretzky and a one-time contender to lead the Conservatives, moved to the USA where he was convicted on felony charges having pled guilty in California to committing perjury during a bankruptcy proceeding.