The Struggle for Family Leave

Family leave has had a major, positive effect on the economic stability of families, on the emotional stability of children and parents, on the ability of workers, especially women, to advance their careers and still bring up a family, on the work life / family life balance of workers, and on workplace stability, since employers are better able to retain workers. 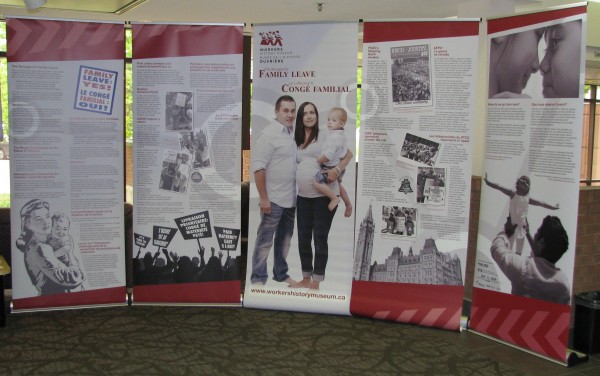 In 1971, the Federal Government acted on recommendations from the Royal Commission on the Status of Women. They amended the Unemployment Insurance Act to include 15 weeks maternity benefits at 66% of their salary for mothers with at least 20 weeks of insurable earnings.

In 1981, the Canadian Union of Postal Workers (CUPW), under the leadership of Jean-Claude Parrot, had to strike for 42 days to win 17 weeks paid maternity leave, but they made the issue legitimate in the public’s eyes.

The following year, federal clerks, members of the Public Service Alliance of Canada (PSAC), and Bell telephone workers, members of the Communications Workers of Canada (CWC), negotiated paid maternity leave. These wins came after both unions had gone on strike in the previous round of negotiations.

These breakthroughs rocked Canada at the time and still resonate in the lives of young families across the country. This is, in the end, the happy – if unfinished – story of how determined people and changing times have helped to improve the lives of individuals, of families, and of society as a whole.

“The Struggle for Family Leave” draws on a rich trove of resources relating to the evolution of family leave benefits, including union archives, more than 30 videotaped interviews, academic studies, newspapers, and other media. Much of the research and other work was completed by volunteer labour.

“The Struggle for Family Leave” consists of five bilingual display panels, suitable for exhibition in a museum, gallery, school, college or university, workplace, shopping mall, union, or community hall. The panels illustrate in words and pictures the struggle to win maternity leave and other family leave benefits.

The bilingual panels are stand-alone, but can be used to illustrate a bilingual presentation on family leave for students, union members, community groups, etc.

A bilingual web site presents the exhibition material on-line and makes it accessible to a wider audience. 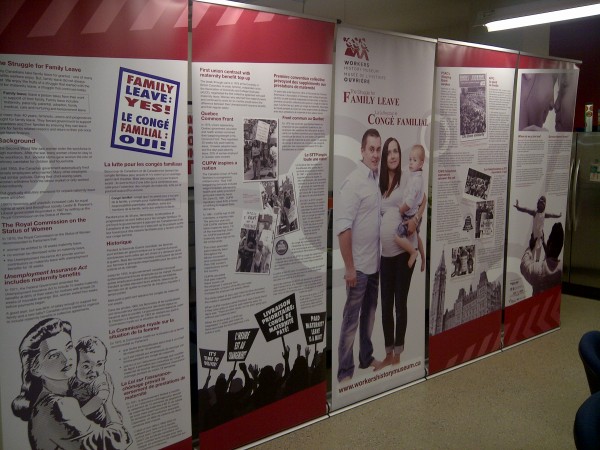 A Struggle to Remember: Fighting for Our Families

A Struggle to Remember: Fighting for Our Families explores how Canadian feminists, unionists, and political activists built a potent coalition, mobilized public opinion, and achieved vast improvements in maternity leave and other family leave benefits.

The 20 minute documentary shows how it became accepted that women be able to return to their jobs after maternity leave and how men and women gained real and enforceable work?

It starts with the 1960′s struggle to recognise women’s role in society and the workplace. This struggle led to the 1971 extension of Unemployment Insurance benefits to include partly paid maternity leave and ends with key same?sex benefit cases in the 1980′s that outlawed discrimination in bereavement leave.

Interviews with key figures from the movement, and interviews with people who have directly gained from the changes in family benefits are shown. Archival footage shows unionists agitating, organizing, and striking to advance family issues as union priorities. Contemporary footage shows how the struggle continues today with issues like the negotiation of aboriginal custom adoption contract language in Inuktitut and Dene.

The video, which is directed by award-winning Winnipeg Director Aaron Floresco of Past Perfect Productions, has been ready for distribution since spring 2012.

If you are interested in ordering a copy of the video or hosting a screening of the documentary at your event or institution, please contact us.

History Slam Review of the premiere.

The production of this video has been made possible by the financial support of: