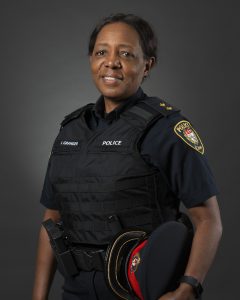 Isobel Granger was the Ottawa Police Service’s first black woman promoted to the rank of inspector. Isobel grew up in Rhodesia (now Zimbabwe), where she began her policing career. She became a police officer because she refused to accept the limitations that black people could not join the police force. She was the first black female officer hired by the British South Africa Police.

In 1989, Isobel immigrated to Canada with her family. She continued her limitation-defying career in Ottawa, where she has since risen through the ranks. She was promoted to the role of Inspector in 2018.

Besides her policing duties, Isobel is a motivational figure in her community. She works to break down barriers for police, for racial inequality, and for women. Her work has been recognized with many awards. She has been the recipient of the Margaret Eve Leadership Award for Women in Law, the Black Leaders Leading Award from Profiles in Diversity Journal — North America, the Martin Luther King DreamKEEPERS Citation for Outstanding Leadership, the Toastmasters International Communication and Leadership Award, the Black Women’s Civic Engagement Network Community Leadership Award, and the Harry Jerome National Award for Public Advocacy. In 2015, she was inducted as a Member of the Order of Merit of the Police Forces.

Most recently she wrote the book entitled Smashing the Glass Ceiling: A 10-step Guide Using Creativity and Innovation to Bust Through the Barriers to Female Leadership.