On a snowy December night in 1942, the town of Almonte, Ontario’s Christmas celebrations were cut short when a train transporting Canadian troops rear- ended an Ottawa-bound passenger train that was waiting at the station platform. It is considered one of the worst train wrecks in Canadian history.

“Anyone with any sense would have stayed by the fire that dreadful night. Snow and sleet competed with freezing rain as engineer Joe Sauvé, and conductor M. O’Connell approached train No. 550 in Petawawa on December 27, 1942. They would have to pull the 10 wooden cars with “the contemptible old hog”! The engine: light Pacific No. 2518 had plied the tracks of the Ottawa Valley for 34
years and in all that time, it had not had a single trip that went smoothly. This would be its most disastrous… Thirty six people died
and 207 were injured…” “…At the Canadian Pacific Railway station in Almonte, Ontario, a Canadian military troop train operated by Canadian Pacific struck the rear of a local C.P. passenger train No. 550, “The Pembroke Local”. Duncan H. du Fresne (in The RailLink, Mississippi Valley Associated Railroaders)

A story celebrating the people who rode and worked on the trains of the Ottawa Valley and, specifically, those who came to the aid of No. 550 Pembroke Local, during the foul weather of December 27, 1942.

The Workers’ History Museum in collaboration with the North Lanark Regional Museum is proud to present “The Almonte Train Wreck – A Story of People”. Ottawa Storytellers Donna Stewart and Ruth Stewart-Verger tell stories of the people and events surrounding the Almonte Train Wreck. Johnny Spinks, a local Almonte singer accompanied by Bradley Scott, sang Mac Beattie’s song “Train Wreck at Almonte” courtesy of the Beattie family and his own song “Rust on the Rails”. 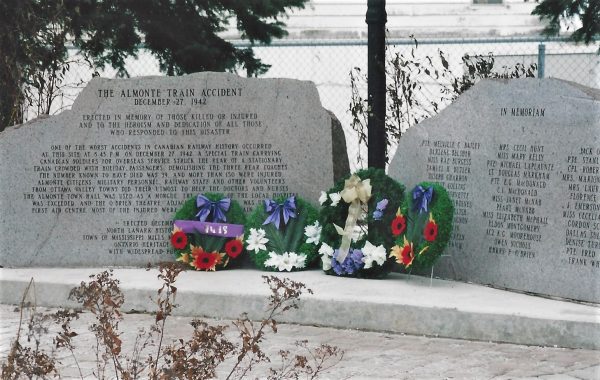