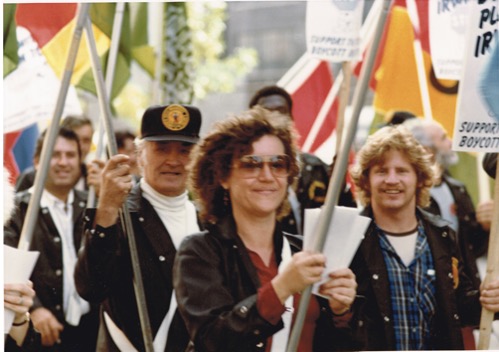 Deirdre was born in 1946 in Dartford England and came with her family to Canada in 1951, just in time to start school. Her parents, Olive and Gerry, were proudly working class and she grew up listening to her father, labour leader Gerry Gallagher, talk about injustice and workers’ rights. At 16 years old she left school to work with her father at his union office. She got involved in the New Democrat Youth where she met and later married Andre Bekerman and in 1971 their beloved daughter Nadia was born. She returned to school, got her high school diploma then enrolled at University of Toronto where she got an honours degree. During this time Deirdre became increasingly active…she was an early feminist, socialist, anti racism crusader. She and Andre parted ways and she was involved in the struggle to organize child care at the U of T where she met women who would become lifelong friends.

Varda Burstyn met Deirdre in 1968 when they were both in their early twenties. “We were both, in our own ways, part of a dynamic new left that had injected tremendous vigour in the older parts of the traditional left, expanding the scope, the reach and the verve of Canadian class politics. Deirdre, even at 23, was already a veteran in every aspect of this exciting political movement. What Deirdre embodied so vibrantly at that time – today we would say her intersectionality – she shared with the world by providing brilliant and dedicated leadership to the growth of feminism and feminist understanding in the labour movement at the same time as she explained and fought for a class analysis and class politics in the women’s movement.’’

In the mid 70s Deirdre became active in creating Organized Working Women, and, as Debbie Fields recalls, became the first OWW Executive Secretary in 1977. “Deirdre believed that women needed to be self organized if we were going to be heard and played a pivotal role in building women’s committees inside of unions. Deirdre and I were part of the group that organized the first International Women’s Day March in Toronto in 1978. That year I started my job as Ontario Public Service Employees Union’s (OPSEU) first Equal Opportunities Coordinator and I needed all the help I could get to survive the mostly male leadership. Deirdre was always there with concrete and helpful advice.” 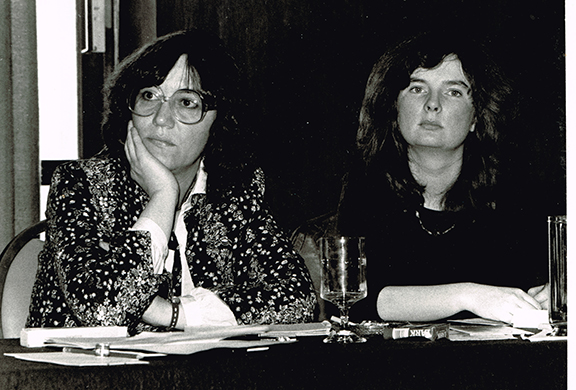 At OWW Deirdre also worked closely with Shelley Acheson who was the Ontario Federation of Labour (OFL) Human Rights Officer and OWW executive member. She remembers her friend as deeply principled, inspiring and charismatic. “Her deep knowledge of the labour movement and the critical role of unions in vastly improving the lives of working women and men made her an excellent teacher for many of us young women.”

She also worked with Deirdre on the OFL Women’s Committee. “Of particular note was her organizing of the women at the microphones on the floor of the 1982 OFL Convention, to get five seats for women on the OFL Board of Directors. This was a bold proposal, supported by the OFL leadership but definitely not widely supported in the broader movement. Deirdre did not back down…she took on major male leaders in the unions and stood her ground. Her courage gave courage to others and was a significant turning point in gaining power and recognition for women in the labour movement.” 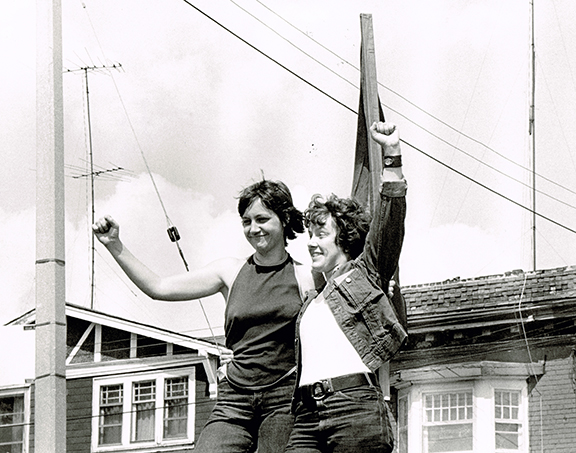 In 1979 Deirdre got a job with the Communications department of the United Steelworkers of America. David Mackenzie, former assistant to the National Director USWA, remembers Deirdre…. “In her half decade with our union she left a lasting impact, qualitatively improving Steels internal operations and public activities. Working with Marc Zwelling she produced countless articles, news releases, leaflets, conference documents and speakers notes and also worked on the redesign of the monthly journal Steelabour. She rapidly won the respect of the union’s leadership and was appointed as communications director on Marc’s departure in 1981. She also collaborated on the creation of a training program which encouraged Steelworker women to pursue leadership roles in their local unions and the wider movement. It was a breakthrough program, setting the stage for the union’s popular “Women of Steel” initiatives in the following decade.”

In 1983 Deirdre joined the Toronto Regional Office of the PSAC as a Regional Representative bringing her invaluable knowledge and experience in organizing, union education, communications and strike mobilization. Sue Jones, first a PSAC activist, then a Regional Representative, remembers working with Deirdre in Toronto. “She helped build the union to make it more representative at many levels. Her inclusive style of work contributed to a productive office…she was a strategic thinker, always planning long term…I could feel her intensity when working together.”

During this period Deirdre met her life partner Eric Lunn and in 1988 they had their much adored son Liam.

In 1990 Deirdre took a position with the newly elected NDP government, working for Frances Lankin. In 1991 she was lured back to the PSAC, to move to Ottawa to a series of senior management positions where she used her organizational skills to assist in making needed internal changes to the union. Working as the Assistant Director for the Regional Offices Branch she undertook a major reorganization of the regional management team, a challenging undertaking which required extensive consultation.

In the late 90s Deirdre became the Director of Collective Bargaining and immediately set to work to make positive changes.

Theresa Johnson recalls, “Around this time, PSAC was increasingly aware of the lack of equity representation in its staff ranks. This included the Collective Bargaining Branch with an exclusively male cohort of negotiators. Deirdre’s view was that this had to change. And she was about to make it happen. I will never forget being invited to a conference and offered a ride by Deirdre. I was a bit daunted. I admired Deirdre’s sharp intellect and analysis and wondered why I alone was invited to drive with her. It soon became clear. Deirdre, ever strategic, had a plan to place two women in negotiator positions and she wanted Sue Jones and me to apply. “There will be women negotiators. We’d like them to be from inside PSAC.

Deirdre was a woman who saw talent and potential in those around her. She brought people into her orbit, guided and encouraged us to reach our full potential.”

Terri Lee Rayvals Mele, former PSAC staff member, remembers how Deirdre profoundly shaped her heart, her politics, her sense of self and her career.

“As a staff leader at the PSAC, Deirdre found a way to live her principles through her work. She gave dignity to the power she had by creating egalitarian spaces for PSAC staff and members to dialogue and organize and agitate, even when it was her they were agitating against. Under her care, the very culture of our union evolved and we became less of an “old boys” club and more like a serious, diverse, more inclusive, progressive organization; not perfect, but so much improved. Deirdre broke ground for women in many of the union occupations that had previously been slated, almost exclusively, for men.”

Deirdre was a deeply strategic thinker and this was a great asset to the elected leadership of the union. She had a profound respect for the union membership and their capacity to effectively mobilize. She was excited to be involved in various union campaigns including the historic fight for pay equity, an issue close to her heart.

Deirdre strongly believed that the union staff needed to be representative of the membership and in her various senior staff positions always aimed for that goal.

Sadly, Deirdre is currently in care as she suffers from a form of early onset dementia.

Although she is now unable to communicate with us she remains in our hearts and continues to inspire us.

As Varda Burstyn says “A passionate orator, a brilliant strategist, a great writer, a tireless worker and a beautiful woman, body and soul, she deserves to be honoured as a great pioneer of justice and change without whose efforts our society would be poorer.”

On August 25, 2022, Deirdre Gallagher passed away peacefully at the Glebe Centre in Ottawa.