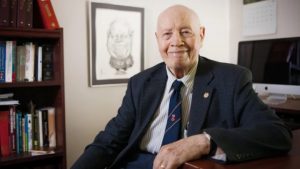 With Ed Finn’s passing at the age of 94, Canadian citizens in general and working people in particular lost an important voice in their struggle for economic and social equality.

Born in Spaniard’s Bay and raised in Corner Brook in what was then the Dominion of Newfoundland, essentially a colony of Britain, Ed left school before finishing Grade 11 to work starting at the Bowater Pulp and Paper mill and then the local paper, The Western Star. Working his way up from the press room, Ed went on to become a reporter and then ultimately, after a stint as a reporter for the Montreal Gazette, editor. By that time Newfoundland, led by Joey Smallwood was well into its first decade as Canada’s tenth province. Ed initially admired Mr. Smallwood but they openly clashed when loggers represented by the International Woodworkers of America went on strike. Smallwood’s government attempted to decertify the union and used the police to harass the picket lines. Rather than kowtow to his publisher’s pressure to malign the strikers’ cause, and report only the company and government side of the dispute, Ed and two of his colleagues left the newspaper and set up a rival journal, The Newfoundland Examiner, devoted to uncovering business and government corruption.

Ed opened up yet another front in the battle with Smallwood’s Liberal Party when, with support from the Canadian Labour Congress, he helped found The Newfoundland Democratic Party and led it into the 1959 provincial election. Neither the party nor Ed were elected but they helped provide important political expression to the growing workers movement in the province at the time. Undeterred, Ed ran again, both provincially (1962) and federally (1963) under another NDP banner, this time the fledging New Democratic Party of Tommy Douglas.

Ever supportive of the working class and always with a journalist’s critical perspective, Ed devoted much of the next years of his life to the struggle for fairness in an increasingly capitalist Canada. In 1962 he brought his considerable communications skills to Saskatchewan to help the Tommy Douglas’ NDP government counter the misinformation emanating from striking doctors opposing the newly introduced provincial medicare plan. His weekly The Public Voice went a long way towards turning public opinion against the doctors’ campaign thereby allowing a nascent provincial heath care plan to gain a solid foothold and provide a working example to underpin the creation of a national program which continues to benefit all Canadians to this day.

Ed then spent much of the next thirty years working in Ottawa within the burgeoning Canadian union movement, first with the Canadian Brotherhood of Railway, Transport and General Workers (CBRT) for 18 years, then the Canadian Union of Public Employees (CUPE). At the former he edited the award- winning magazine Canadian Transport until he was fired for refusing to cross a picket line set up by his employer’s support staff. Once again Ed’s principles would not be compromised despite the consequences. The next ten years he worked at CUPE National Office editing The Facts, a journal which was widely distributed throughout the union movement and provided union activists, elected officers and staff with the necessary ammunition to fight back against the neoliberal agenda of the day. Always a prolific writer, Ed had a way of boiling down complicated issues to understandable bite sized bits which could be understood by working people and citizens alike.

Ed had a lot to say and constantly sought a wider audience. For 14 years he maintained a regular column in The Toronto Star, quite possibly that paper’s first labour columnist. When he was obliged to retire from CUPE at age 65 in 1991, he didn’t miss a beat but started writing for the Canadian Centre for Policy Alternatives (CCPA), becoming their senior editor and founder of their monthly publication Monitor, a post he held until he retired once again in 2014 at the age of 87. Thereafter, he continued writing articles, essays, books and reports right up to the last months of 2020. His book The Right is Wrong and the Left is Right nicely sums up his astute perspective on the passing political scene as does his articles Canada’s Dismal Record on Child and Elder Care Leaves Little Room For National Pride and Cuban Missile Crisis Anniversary A Reminder Of The Dangers Of Donald Trump which appeared in rabble.ca in September and October 2020, respectively.

Rather belatedly, Ed was appointed to the Order of Canada in November 2020.