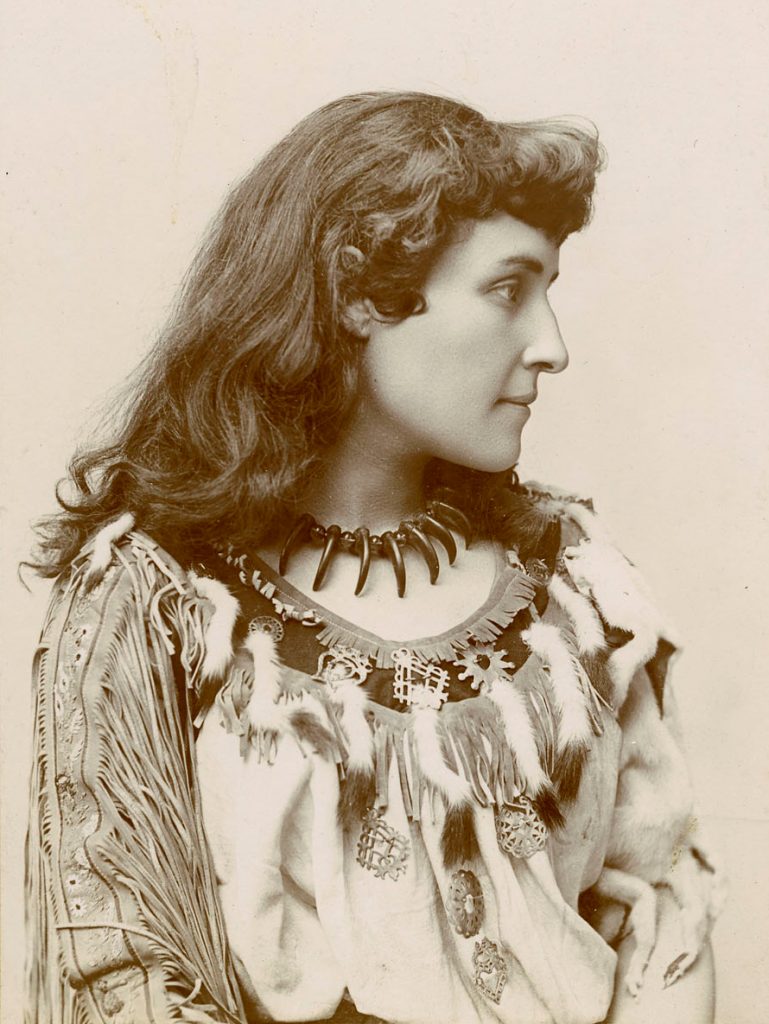 Pauline Johnson was Canada’s first Indigenous author and renowned poet, as well as the first Indigenous born cultural ambassador. Pauline, also known as Tekahionwake, was the daughter of a Mohawk chief and an English immigrant. Due to childhood illness, she was educated at home. She studied in both Native and English traditions.

Pauline started writing poetry as a teenager, but she did not consider it a profession until 1884, when her father passed away. To help support the family, she began sending her work to the New York Magazine, Gems of Poetry. Her works met with increasing success, and in 1892, after a poetry reading for the Young Men’s Liberal Club of Toronto, she was invited to tour across Canada. She would go on to tour for 17 years in Canada, the United States, and the United Kingdom, and was met with international success.

During this time Pauline also began to publish books, the first, White Wampum, was published in 1895. She did not limit herself to poetry, but also gathered traditional Indigenous stories so that they could be shared with the wider public. Some of her other works include Canadian Born, Flint and Feather, Legends of Vancouver, and The Moccasin Maker.

In 1909, Pauline retired from touring to Vancouver, where she would continue to write until her death due to breast cancer in 1913. In 1961, Pauline was the first woman to be featured on a Canadian postage stamp.

Pauline was a duel activist, for Indigenous Peoples as well as for women, who challenged conventions both in her performances and in her written work. She was an imperialist who believed in a vision of Canada where all groups could live together peacefully as equals. Her legacy has inspired generations of Indigenous Peoples to live and thrive as artists.