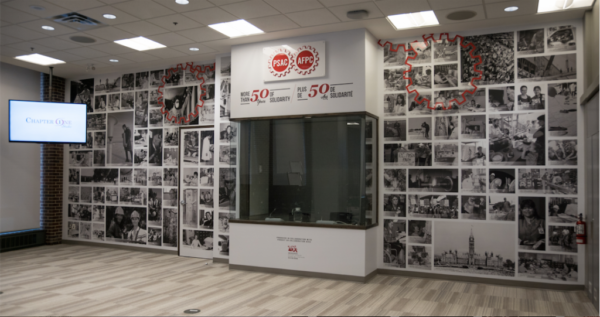 As part of the celebrations around the Public Service Alliance of Canada (PSAC) 50th anniversary, the Workers’ History Museum created a wall exhibit for 233 Gilmour Street in Ottawa about PSAC members and the work they have done over more than 50 years.

Both the public and even some PSAC members will be surprised at the variety of jobs done by PSAC members over the years from the mid-1960s to 2016. Also shown are some members who won major human rights victories that resulted in changes for other Canadians. The 1980 CR (clerical workers) strike, the general 1991 strike and the creative ‘Red Shoes’ strike at the National Art Gallery are depicted too.

There are also photos of Bonnie Robichaud, who took her case of sexual harassment to the Supreme Court of Canada and won a decision making the employer responsible for a harassment-free workplace; Dale Akerstrom’s Human Rights Tribunal decision that gave equal benefits for LGBTQ+ members; and Mary Pitawanakwat who won a racial discrimination victory.

These unionized workers were proud to serve their fellow Canadians.

In its first half-century, the Public Service Alliance of Canada evolved from a marriage of convenience between two rival public service organizations in 1966 into one of the country’s strongest and most progressive unions. The story of how this came to be is a tribute to those members, staff and leaders whose vision and dedication set a steady (if sometimes stormy) course over the past five decades.

The history of PSAC has not only been one of celebration, but of reverses and setbacks. The union has faced many obstacles, internal and external, as it grew, learning collectively from its failures as well as its successes. Its history so far is, of course, a work in progress: much remains unfinished, and many new and complex challenges lie ahead. But the union’s hard-won maturity and ability to adapt have equipped it well to face the future with confidence.

These breakthroughs rocked Canada at the time and still resonate in the lives of young families across the country. This is, in the end, the happy – if unfinished – story of how determined people and changing times have helped to improve the lives of individuals, of families, and of society as a whole. 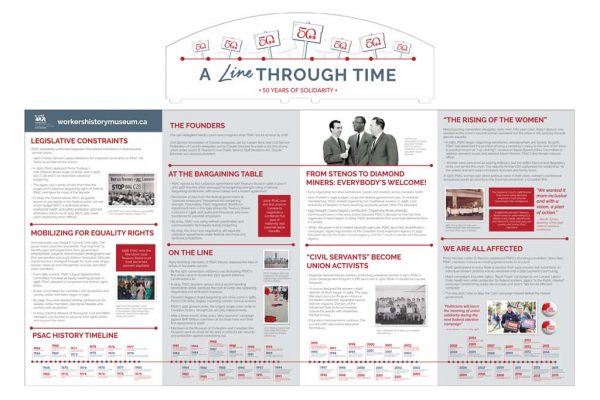 About the Public Service Alliance of Canada

The Public Service Alliance of Canada represents more than 180,000 workers in every province and territory in Canada and in locations around the world. Our members work for federal government departments and agencies, Crown Corporations, universities, casinos, community services agencies, Aboriginal communities, airports, and the security sector among others. PSAC is headquartered in Ottawa with 23 regional offices across Canada. The union celebrated its 50th anniversary in 2016.

About the Workers’ History Museum

The goal of the Workers’ History Museum (WHM) is to present, promote, interpret and preserve workers’ history, heritage and culture. WHM is a not-for-profit corporation, founded in January 2011 and based in Ottawa, Ontario. The WHM video Simply the Best (Cal Best: Sa Vie) covers important events in the pre-history of PSAC. 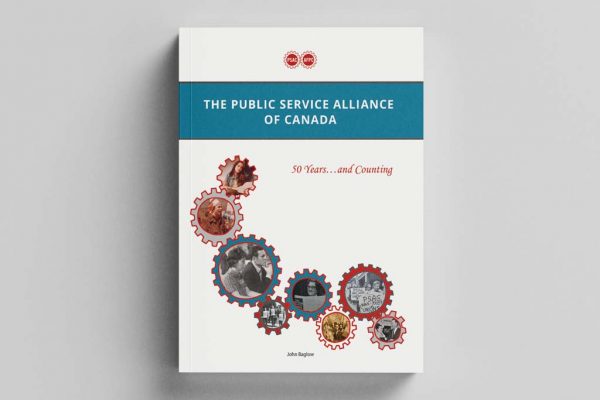 Fifty years ago, the leaders of many different, often competing, associations came together at a convention to formally establish a union for federal government workers. This represented the culmination of years of struggle to achieve what other workers outside the federal public sector had enjoyed for decades. It was the first step to bringing about real change in our members’ workplaces. It helped families and built communities. 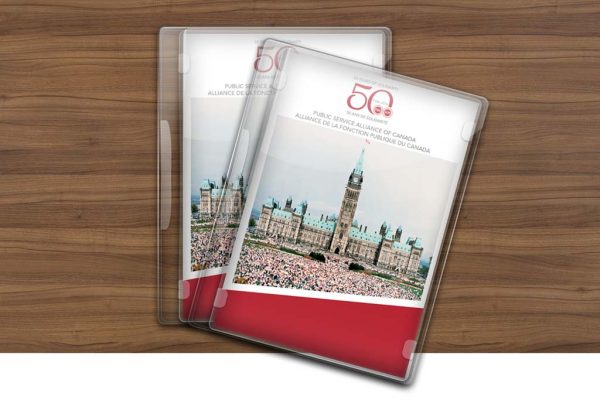 In 50 years, our membership has grown to include public sector workers in the north, university teaching and research assistants, workers in Indigenous communities and more. From the beginning, PSAC recognized the need to reach out to the broader labour movement, working in Canada and internationally to build solidarity with the struggles of working people around the world. As we celebrate our first 50 years, the work of building our union goes on.