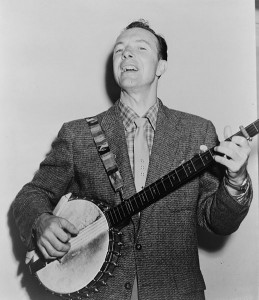 Last month, we marked with sadness the passing of the great musician and activist Pete Seeger. We also learned the interesting story behind his appearance in Ottawa back in 1958.

Pete Seeger had been blacklisted in the US since 1953, a victim of McCarthyism and the House Un-American Activities Committee, and many venues were closed off to him. But three enterprising young workers in Ottawa each put up $25 – a huge amount of money at the time – to bring Pete Seeger here. He played on November 27, 1958, at the Fisher Park High School Auditorium.

One of these men, Gil Levine, had a seven-year-old daughter at the time. We asked Tamara Levine to share her memories of that night. “I’d been raised on the music of the Weavers and Pete and remember the concert well,” she said. “I got to wear my patent leather party shoes and go on stage to pick a name out of a hat for the winner of the prize of a Pete Seeger album.”

Tamara was at Pete’s last Ottawa concert in 2009, along with the two other organizers of the 1958 event, Max Sternthal and Harvey Glatt. Gil couldn’t be there this time – he was to pass away later that year.