The Workers’ History Museum is excited about our upcoming E.B. Eddy exhibit, to be housed in our office at 251 Bank Street, Ottawa. The exhibit will be drawn from the Canada Science and Technology Museum Corporation (CSTMC)’s Domtar Eddy Booth collection, which contains more than 20,000 items including artifacts, photos, drawings, advertisements, and brochures.

For those who don’t already know, the E.B. Eddy Company was founded by Ezra Butler Eddy in 1851. Eddy’s first product was matches and he later expanded into making other items such as pails, doors, and sashes. In 1891, Eddy entered the pulp and paper industry making products such as toilet paper. The company was originally located on the Hull side of the river, beside the Chaudière falls and the Alexandria Bridge. Then in 1947, Eddy acquired the J.R. Booth Company. This expanded the company to both sides of the river. In 1998, E.B. Eddy was acquired by Domtar (which explains CSTMC’s official name for the collection). The Domtar plant continued until 2007, when the last paper machine of the Domtar E.B. Eddy plant was shut down.

The collection contains rich materials to provide the WHM with several avenues to interpret E.B. Eddy’s history. Today, we would like to share some of these to give you a better idea of what goes into creating an exhibit. 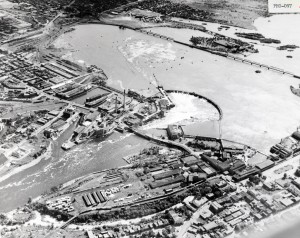 A possible theme for our proposed exhibit is to demonstrate the history of changes to the E.B. Eddy site from 1851 to present. The collection contains several aerial site photographs of the plant. The use of these photographs reveals the expansion of the plant and its larger implications for the growth of the working class in Hull and the surrounding area. This photograph is an example of one of many photographs the WHM could use in this comparison.

Another interesting avenue to interpret this collection is its implication on gender working class history. The photographs below illustrate women from the 1920s and 1950s working in the E.B. Eddy factory. They completed tasks such as counting sheets of paper and packing matches. Their inclusion in the factory suggests that women were thought to have the appropriate skills for the kind of tasks in the factory such as counting sheets of paper. Their specific duties also provide an indication of the type of “appropriate labour” for women in each period. Unfortunately, there is very little information associated with the photographs; further research into women’s work in pulp and paper factories is required if the topic is to be explored in greater detail in the exhibit.

Another research possibility is a partnership with the CSTMC in an oral history project. Since the plant closed in 2007, we might encourage former E.B. Eddy workers to share their experiences about the plant. Our expertise in documenting oral histories could help us to collect and preserve these stories.

Regardless of which avenue the WHM takes, the future exhibit will focus on the workers. One overall message from our visit to the CSTMC’s archives came from David McGee, CSTMC Archivist, who generously shared the contents of the collection with us. McGee stated that “the collection represents much more than a chemical process.” This is precisely how the WHM views this unique opportunity to share the workers’ history of E.B. Eddy: as a chance to present an untold story.

The WHM would like to thank the Communication Energy and Paperworkers Union of Canada (now part of Unifor) for funding the E.B. Eddy summer exhibit.