Is today the day you die at work? 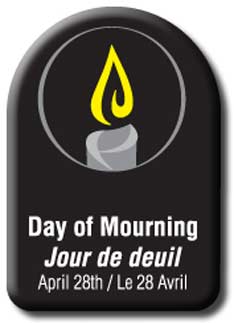 This is a question asked by the Canadian Labour Congress. Between 1993 to 2011, 17,062 people lost their lives due to work-related causes – an average of 898 deaths per year. In 2012 alone, 75 Quebecers lost their lives in workplace accidents.

Each year on April 28th, the National Day of Mourning commemorates workers who have been killed, injured, or have suffered illness due to workplace-related hazards and incidents. Events are held in many locations across Canada. In Ottawa, the flag on Parliament Hill is flown at half-mast, and workers and employees observe this day by lighting candles, donning ribbons and black armbands, and observing moments of silence. Visitors to Vincent Massey Park can show their respect at the national monument built in recognition of all workers killed and injured on the job. This site was chosen because of its proximity to one of the worst construction accidents in Canada’s history: the collapse of the Heron Road bridge that killed 9 people and injured another 55 on August 10th, 1966. (Dave Bennett, a member and former Secretary of the Workers’ History Museum, worked tirelessly with others for the creation of the monument.)

April 28th was chosen for the National Day of Mourning because on that day in 1914, Canada’s Workers Compensation Act received its third reading. The Canadian Union of Public Employees (CUPE) first observed the Workers’ Memorial Day in 1984, and the Canadian Labour Congress officially declared it an annual day of remembrance the next year. In December 1990, this day became a national observance with the passing of the Workers Mourning Day Act. April 28, 1991 was the first official National Day of Mourning for persons killed or injured in the workplace.

Since its inception, this homegrown observance has spread to over 80 countries around the world, although in most other countries, it is simply known as the Workers’ Memorial Day. In 2001, the International Labour Organization first observed the World Day for Safety and Health at Work on April 28th. Whatever its name, the purpose of this commemoration is twofold: to remember and honour those lives lost or injured and to renew our commitment to improving health and safety in the workplace in order to prevent further deaths, injuries, and diseases from work.

We have some of the best health and safety laws in the world, yet the number of workers that lose their lives continues to increase. In 1993, the number of fatalities in Canada was 758. In 2011, 919 workplace deaths were recorded in Canada – a decrease from 1,014 the previous year. This represents more than 2.6 deaths every single day.1 In addition, during 2012, there were 245,365 injuries in Canada.2 Unfortunately, the annual observance of the National Day of Mourning has not made Canada safer for workers.

Is today the day you die at work?