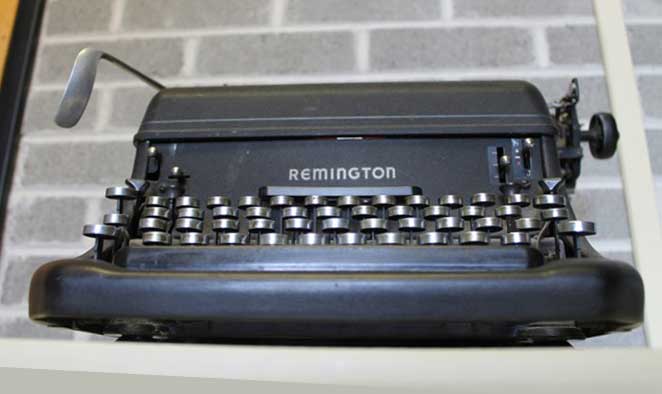 Is it possible to attribute personality to a machine?

The typewriter is a complicated device – even the word “typewriter” is notoriously sticky, used to refer both to the machine itself and its user. When we think of a typewriter, the mind wanders from the hammers and keys of the machine to the writer manipulating those lifeless pieces, feeding the paper, returning the carriage. This lends a certain romantic, nostalgic air to what is, otherwise, quite a prosaic device. As a historied object, the typewriter can pique the interest for its human side, its aesthetics, and its peculiarities in light of our more digital textual moment.

The Ukrainian typewriter at the Workers’ History Museum is more likely than most to evoke a sense of wonder and curiosity. This is a unique machine, at least from the perspective of most typists. Even among other surviving typewriters, this object is visibly different – it has glass-capped keys (not metal, not plastic-coated) and Cyrillic lettering. 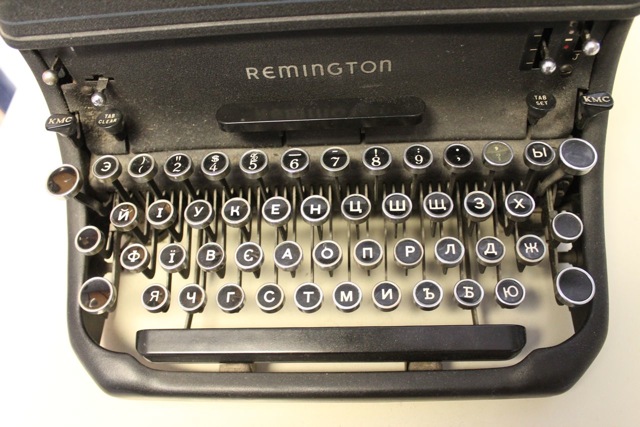 As a writer interested in typewriters, my mind went immediately to provenance and construction. Who made this machine? Who used it? What documents did it crank out? Especially, I was curious as to: “When was this machine made?” One of the darker aspects of typewriter history is that the machine was mass-produced in old munitions factories in the United States after the Second World War, by companies that had driven the war-machine before switching to driving bureaucracy.

If this machine were to fall into the same category, how would it relate to mid-century labour and my understanding of textual production for a non-English community?

This typewriter’s documentation* tells us that the machine – from the Ukrainian Labour-Farmer’s Temple Association, Winnipeg – was built by Remington Rand and affiliated with Remington Arms, one of the above-mentioned manufacturers. 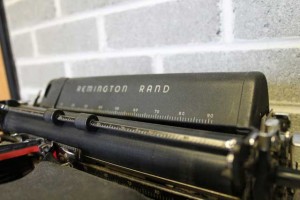 However, significantly, the typewriter was built before the Second World War entirely – from circa 1927-1939 (ibid). This Ukrainian typewriter was made in the United States and used by a labour organization in Canada. It is not some product of Slavic machining, nor is it tied to the great ink-spilling of the Cold War.

My assumptions needed to be reconfigured – this typewriter had been used in the promotion and communication of a bi-national (Canada and Ukraine) labourer’s identity. What history might have been imprinted by its keys?

The impulse to romanticize the device is almost overwhelming. It was used to write communiqués and newsletters in a context of surveillance and uneasy cooperation, forced into bilingual production. More than any larger printing process, this is an object that might have been used for quick production, a portable press, without incriminating plates or difficult set-pieces. It might have satisfied a desire to communicate and connect in an easy, cheap way, a more human device that, used for minutes and memos, might just as easily have been used to write a quick note in one’s mother tongue, perhaps to a paramour… 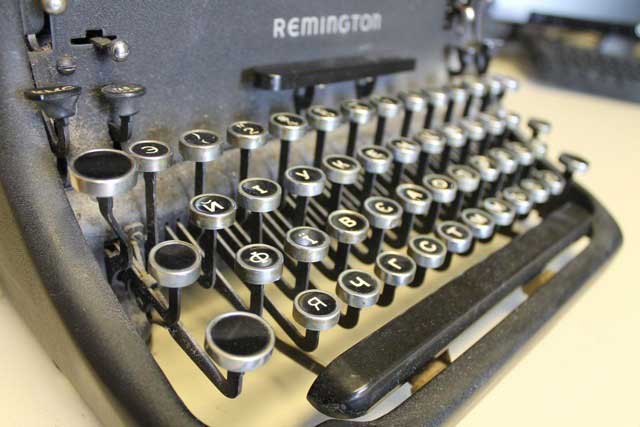 The very versatility of the machine, its proletariat usability, catches the imagination and pulls at us, making us wonder at its use, and its impact, on the lives of its users and the production of non-official discourse in our own state and histories.