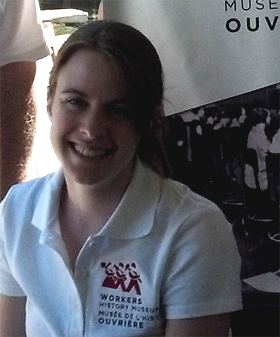 1) What is your name? Christine Goneau

2) Where are you from? I was born and raised in Orleans and have lived here my entire life.

3) What’s your primary occupation? Currently I’m a university student at l’Université du Québec en Outaouais, where my field is Museum Studies. I already have a bachelor’s degree with a specialization in arts with a major in History and a minor in Ancient History.

4) How long have you been a WHM volunteer? Why did you join? I started volunteering for the summer of 2012 and came back this summer (2013) after school to continue. I joined because I have a passion for history and realized I didn’t know much about the history of Ottawa or of its working class and considering how my family has always been strong on fighting for people’s rights and for the working class, I wanted to learn much more. The workers are always present in Canadian history but always overshadowed by one famous person. Also being a history student and now in museum studies this is what fascinates me.

5) Are you/have you been on any committees? I am on the Exhibits and Education Committee.

6) What project have you been involved in that you’re most proud of? I haven’t been on many projects yet so I have to choose the one that I have been working on since the beginning: the Britannia-on-the-Bay (and closely related to that is the history of the Ottawa Electric Railway). I have learned so much from this project and I’ve gotten the chance to interview people involved with the Ottawa Electric Railway. Hearing people’s stories is my favourite part of history, getting that opportunity with this project has been wonderful. Those stories bring life and reality to history. Also, I enjoyed learning about what people used to do at the beginning of the 20th century for fun in the region.

7) What’s the best thing about volunteering for the WHM? This goes back to why I joined in the first place, I get to learn about so many things that happened in the very city where I was born that I had never heard any of my teachers talk about before. Also, I get to hear all these amazing stories from regular people that have done extraordinary things fighting for what is right, fighting to get better working conditions. Best of all I get to have a hand in telling their story.

8) If you had a time machine and could visit any historical period, when would you choose? There is much that I would like to experience firsthand in history, but I have to say my favourite historical period to study is the 20th century, so I would have to choose that period. I have always been interested about the military strategies used during the two world wars, especially the Great War. It’s an interesting period that would be worth to see because there was a new technological revolution, a new way to make war and everyone was asked to participate. It’s around the time of the First World War that there’s a big evolution with the working class. It’s a period when everyone wants to participate, even kids are asked to participate. With the men going to war, women get all sorts of new jobs on the job market. Unlike the Second World War where you’re fighting against a new regime, during the First World War the importance to Canadians is their identity and it does take on a bigger role during the Great War. We show that we can be a strong country as well. And with our last First World War veteran dying a few years ago, there can be no more new oral history from that period. It’s also a time with no electricity in most rural areas, which is something very different from today and that I wouldn’t mind experiencing for myself — or at least learning from the people that lived it.