Black Canadians, and Black Canadian workers in particular, have too often been a forgotten part of Canadian history. As part of Black History Month, we hope to share a little of their experience and what it means to our lives today.

Black Canadians played an extremely important role in both of the World Wars. In 1916, Canadian enlistment figures fell dramatically below the year-end goal. On the offer of Reverend C.W.

Washington of Edmonton, military officials authorized the creation of the No. 2 Construction Battalion, the first large Black military unit in Canadian history. These soldiers served in France with the Canadian Forestry Corps. In addition, approximately 2,000 Black Canadian men, determined to fight on the front lines, managed to join regular units despite racial discrimination; their distinguished service earned some of the men medals for bravery.

These were by no means the only Black Canadians to contribute to Canada’s efforts in the First World War. Between 1914 and 1918, on their own and in collaboration with white groups, Black associations and individuals raised funds, worked in factories, and volunteered in hospitals and as labourers. Although barred from participation in Canada’s war effort, Black women in particular played an important role. They formed the Black Cross nurses (modeled on the Red Cross) to aid wounded soldiers and the Black community by providing medical services such as first aid, nutrition, health care, and childcare. Black women also worked in ammunition factories; these women were given the most dangerous jobs, such as working with explosives.

Initially, the Canadian military refused to enlist Black volunteers for the Second World War effort. As the war continued, however, many Blacks were accepted into the Regular Army and officer corps. Although segregation persisted until the end of the war, hundreds of Black Canadians served alongside whites in both Canada and Europe. As in the First World War, those at home assumed the responsibilities of the men and women who had gone overseas, working alongside whites in jobs across the country. The war allowed for a wider variety of roles for Black Canadians serving and sacrificing both at home and overseas. Their service stands as a measure of how Black Canadians were increasingly integrated into wider Canadian society.

In the 1920s, a wave of Blacks from the Caribbean had immigrated to Nova Scotia. They came to work in the steel mills in Cape Breton, although a great number became porters on the railway. Through the Brotherhood of Sleeping Car Porters (the first Black railway union in North America) and the Order of Sleeping Car Porters, workers fought Jim Crow trade unionism and segregationist employment policies on Canadian rails. With growing political savvy, these groups used existing labour law to publicize discrimination in the Canadian workforce.

The Brotherhood of Sleeping Car Porters has been noted as one of the greatest success stories for Black workers during the years of the Second World War. After the war, porters also played an important role in the campaign for human rights, particularly in efforts to end discrimination in railway employment. Through their actions, Black railway porters gained recognition for Black workers across Canada.

On 14 March 1944, the Racial Discrimination Act made Ontario the first province to respond to social change. This landmark legislation prohibited the publication or display of any symbol, sign, or notice that conveyed ethnic, racial, or religious discrimination. This Act sparked other sweeping legislation across the country. The 1945 B.C. Social Assistance Act and the 1947 Saskatchewan Bill of Rights banned discrimination; in 1948 Canada signed the 1948 Universal Declaration of Human Rights. 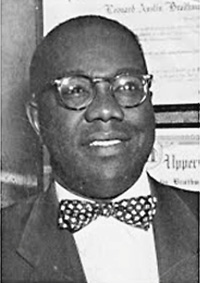 That same year, the federal Elections Act was passed, making race no longer a ground for exclusion from voting in federal elections. But it was not until September 12, 1963 that the first African-Canadian, Leonard Braithwaite, was elected to the provincial legislature as the Liberal member for Etobicoke, Ontario.

In 1975, Black reformer Wilson Head created the Urban Alliance on Race Relations. Head devoted his life to civil rights activism in both the United States and Canada. His organization is still committed to fighting discrimination against all ethno-racial communities.

During this period, the Coalition of Black Trade Unionists was established and a concerted effort was made for affirmative action seats for racial minorities on the Canadian Labour Congress and Ontario Federation of Labour Boards. At the 1987 Ontario Federation of Labour Convention, Herman Stewart of the International Ladies Garment Workers Union was elected as the first person of colour. The Coalition redoubled its efforts to force national change, and at the 1990 CLC Convention in Montreal, Dory Smith ran against the slate from the floor and garnered over a thousand votes, almost winning a seat. Due to continued pressure, spots for two visible minorities were made on the CLC Board at the next convention.

Black History Month is a time to recognize the experiences of Black Canadians everywhere. At the Workers’ History Museum, we want to commemorate those working class people whose lives and 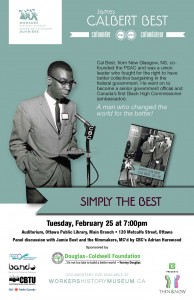 actions resulted in positive, progressive change. The “Cal Best Project” celebrates the life and legacy of one of these men.

The son of activist Dr. Carrie Best and train porter Albert Best, James Calbert Best had an astounding 49-year career as a union activist, senior public servant, and Canada’s first Black High Commissioner (to Trinidad and Tobago). He served as the president of the Civil Service Association of Canada (eventually becoming the Public Service Alliance of Canada, or PSAC) from 1957 to 1966. He also worked as director and assistant deputy to various departments in the federal government. Best made vital contributions to collective bargaining, immigration, and even to Canadian sport.

Canada owes a debt of gratitude to Cal Best, and to all the men and women committed to the struggle for equality.

Join us to celebrate Black History Month with “The Cal Best Project” and the Ottawa premiere of our latest documentary, Simply the Best. Our event includes a panel discussion with Stephen Best, Cal’s son, and the filmmakers; it will be MC’d by CBC’s Adrian Harewood. Tuesday, February 25th at 7pm, at the Ottawa Public Library (Main), 120 Metcalfe Street, Ottawa. Admission is free.