Devoted followers of the WHM website will recall the “Career of a Canal Tug” feature in our “What’s New” section. Well, researcher Paul Harrison, who authored the piece, is not one to rest on his laurels, and has provided the following update:

With the help of a genealogist, I managed to locate a descendant of Captain Shaver, who turned out to be Jordan Juby, retired Ottawa Journal reporter. He knew about the Captain and the tug, and was able to provide for digitizing a copy of his ancestor’s Captains papers, and two great images of the Alva / Minnie Bell. He told us that the 4th Avenue house in which the family lived had been built by the Shavers when they moved to Ottawa to operate the tug, and that it no longer stands, having been replaced by later owners. According to family tradition, the Shavers were United Empire Loyalists, whose trek to Canada after the American revolution involved a perilous winter trek from the Mohawk Valley across the St. Lawrence River ice to reach Canada. A quick check of the UEL Society records lists no less than 25 Shavers.

Mr. Juby also had an obituary of Captain Shaver that mentioned not only his time on the Rideau as a tug Captain, but added that he went on to captain the Empress, a St. Lawrence River side-wheel passenger steamer. That could well explain why Captain Shaver gave up the Alva between 1904 and 1910, but was not listed as retired until 1921. We will follow up on this lead and see if records of the operation of the Empress exist and make reference to him. Stand by!

Meanwhile, here are two of the new images Mr. Juby provided. hanks so much, Jordan!

The man himself, Captain Henry Shaver, in an undated photograph. 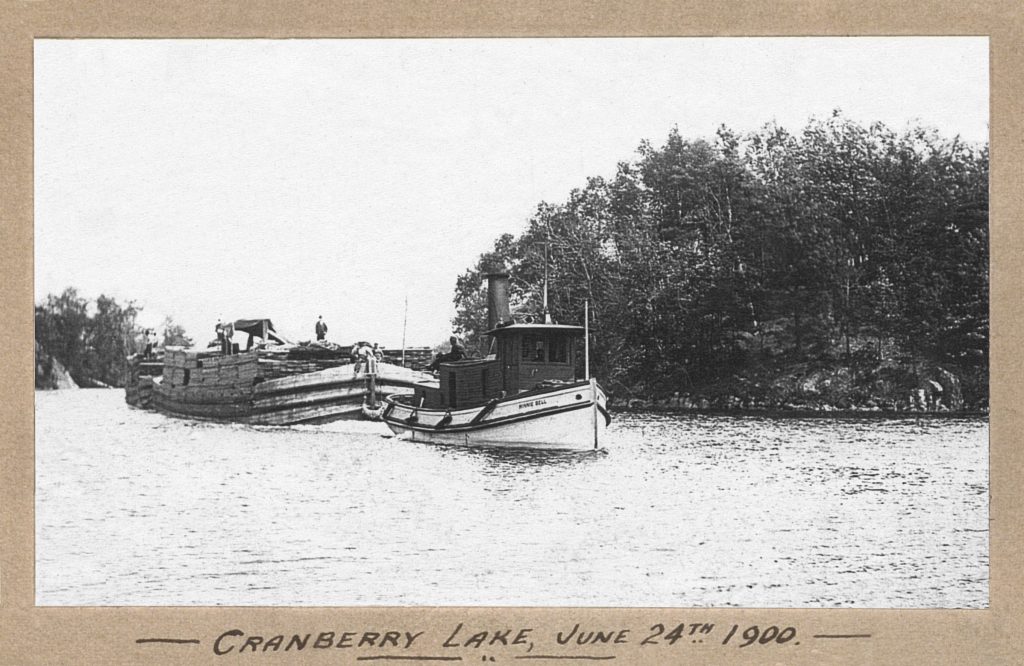 Here is our tug, still the Minnie Bell, towing a typical cargo of timber loaded on a barge on Cranberry Lake, part of the Rideau Canal system just north of Kingston. Behind the barge one can discern at least two others of the same size. While it is not hard to imagine the Minnie Bell towing them, if not in a hurry, one has to wonder how they slowed and stopped on approach to a set of locks. The answer, according to accounts of the period, is that each barge had anchors and a crew. The Minnie brought only one barge at a time anywhere near a lock, and each was slowed by an on-board team of men and manhandled through one at a time. Hence the numerous men visible on the lead barge, with a tarp erected as a sort of shelter tent where they could rest and if necessary lodge for the whole voyage.